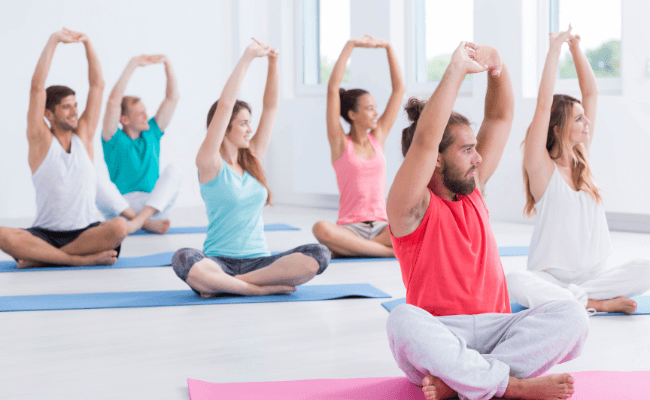 Facts about yoga, Many people think that yoga is a religion or cult. It’s not. Yoga is simply the physical practice of certain exercises, no more, no less. Yoga is about stretching and moving body parts in a given way to produce particular physical effects…nothing more, nothing less, just like lifting weights or swimming. The fact that some people have used yoga as part of their religious practices does not make it a religion any more than Christians using prayer while exercising makes weight training Christian (or vice versa).

There are many religions that contain both physical exercise and meditation techniques within them but they remain separate from one another because each contains principles and values that are in direct conflict with those contained in the other. For example, you can’t be Christian AND Muslim at the same time. So just because yoga is associated with a religion does not mean that it must contain an inherently religious message but rather that some people who practice yoga might have incorporated their own personal religious beliefs into their practice of yoga.

Yoga does not require a belief in God or any other supernatural being to be practiced. It simply requires that you believe in yourself and your ability to succeed at whatever exercise you are practicing on any given day.

I’m sure there are many god-believing practitioners of yoga out there who would disagree with me on this point, but I think they are wrong…just as I hope we all agree that no one should ever be discriminated against based solely upon which set of beliefs they choose to accept or reject.

1) Yoga is over 5,000 years old, It is mind-blowing facts about yoga. As it was developed in India. Adherents of yoga claim that by practicing yoga one can achieve certain results such as physical fitness and a peaceful mind. However, just because something is old doesn’t necessarily mean that it is good or true.  There are many examples of ancient ideas being proven to be false. For instance, the Egyptian practices of mummification were once thought to have some mystical quality but science has been able to disprove this myth.

The practice of going into trances is also another example of an unproven idea backed up by faith alone; believing that when you die your soul will leave your body and live forever in a place called heaven is another example. The claim that yoga will make you more peaceful can only be true if it is proven to work, and so far, there has been no scientific evidence that this is the case.

In fact, according to a study published by Science Direct a journal that ranks in the top 50% of its class, there is actually evidence to suggest yoga diminishes our ability to think rationally and critically. The abstract for this study reads as follows: “Results showed that both groups performed worse after exposure than before exposure on global measures of rational thinking (Ravens Advanced Progressive Matrices) and meta-cognition (Stanford Persuasive Advertising Test).

2) The word ‘yoga’ comes from the Sanskrit language and means ‘to join or yoke’. For thousands of years, yoga has been used to improve physical and mental well-being. It is a system of exercise for increasing strength, stamina, flexibility, and balance that can be practiced by people of any age. Yoga increases flexibility in our bodies while also helping us to maintain good posture. Practicing yoga regularly may help: 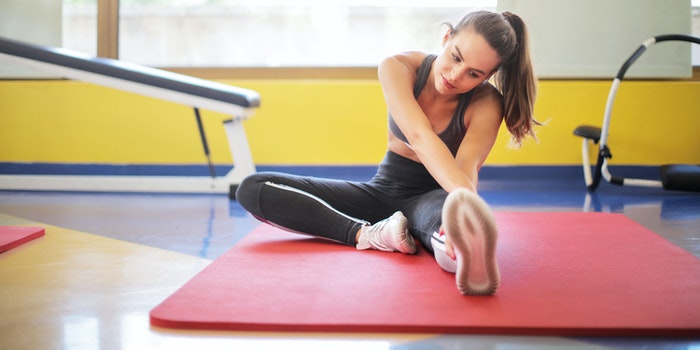 3) Yoga is one of the oldest physical disciplines in the world. It is an interesting fact about yoga. It is a type of exercise that involves physical postures, breathing exercises (pranayama), and meditation or relaxation. Yoga is more than just a way to stay fit. It teaches us how to live our lives by promoting self-awareness and introspection. This practice has been around for more than 5000 years and many people consider it as part of their daily routine because it helps them relax and reduce stress levels, improves their flexibility, decreases blood pressure, and relieves pain caused by arthritis.

4) Yoga is not a religion but that doesn’t mean it’s not tied to religion.

Yoga is only a spiritual path that is practiced not with the purpose of getting close to God, but by removing all kinds of unnecessary things from the mind and body. Only then can people reach their potential in this life and live a happy one. It is about reaching self-realization, personal growth, and health.

In addition, yoga does not distinguish between having faith or no faith or being religious or non-religious. But who said you must be practicing Hinduism to practice yoga? The word yogi just means “one who practices Yoga”. In the Sanskrit language, Yoga means union between the individual soul (Jivatman) and universal soul (Paramatman).

In other words, Yoga is a science that makes you aware of the deepest principles and secrets of life. It is one of the six sastras or orthodox sciences (Vedas, Shruti, Smriti, Nyaya, Vaisheshika & Mimamsa), which give complete knowledge on all aspects of human life. That’s why it is the most popular among all Indian religious and spiritual paths.

5) Yoga was introduced to America in the 18th century. It is an interesting fact about yoga. Through the work of Tirumalai Krishnamacharya, who was considered by many to be its greatest teacher. His students went on to teach yoga throughout India and in many other countries during the 20th century. Through their work, yoga has become widely known in America and Europe. Yoga is the ancient science of health and spirituality that originated in India about 5000 years ago. The word yoga means “union” or “yoking,” as it attempts to unite our minds with our bodies.

It consists of a variety of exercises and breathing techniques designed to balance energy throughout the body through the breath and postures (asanas), thereby promoting good health and self-realization. Through this practice, one may reach a state called Samadhi, gained through meditation (dhyana). The ultimate goal is enlightenment—a realization of one’s inner divinity (atman) and connection with all living things on earth.

Yoga is a combination of body, mind, and spirit. By doing yoga we can achieve the balance between our body mind and spiritual well-being. Yoga helps us to keep healthy both physically as well mentally because it balances the hormones in our body.

Physical benefits of yoga are undisputed but mental and spiritual benefits too are equally important for overall good health. So here are some facts about yoga benefits which you should know:

According to recent studies people who do yoga regularly get good results in their academics as well as sports performance. It also increases memory power improving your ability to concentrate on the things that you are doing. If you really want to enhance your learning capacity then start practicing mindfulness meditation which is a part of yoga.

By doing yoga you can reduce the chance of stroke by up to 40%. You will feel good enough to do the things that you are afraid of because it gives you more confidence and enthusiasm. It also helps in getting rid of depression and anxiety which is a common problem among people these days in almost all age groups.

There are different types of exercises with different benefits according to the needs of an individual. Also, some poses have their own advantages for example if someone is having chronic shoulder pain then he should do a nettle pose as it offers relief from such pain.

In yoga, meditation plays a very important role where through this practice we can get acquainted with our inner self. It is all about controlling the mind and listening to the inner voice. Through meditation, you will know what is right for you at this moment in life. You need to learn how to control your thoughts so if a negative thought keeps on coming in then try not to think of it and rather concentrate on some other thing that can help improve your health mentally as well as physically.

Body control is the best facts about yoga benefits Most of us are unaware of our own body which means we don’t even know which area or muscle needs more attention from us but after doing yoga exercises regularly we learn how our body feels and what part is moving was while doing certain poses. As yoga exercises give positive results in all age groups, everyone should practice them. If you feel lazy then you can choose to start with some easy poses that are essential for balanced health.

Reducing cholesterol is an amazing facts about yoga benefits. It is found in studies that those people who do yoga regularly have fewer chances of a heart attack. Yoga has been used as an alternative treatment of heart diseases and also asthma for ages. It helps in controlling the BP (blood pressure) which is another benefit that one can get from this practice.

And if someone has already had a stroke then he should not wait any further because yoga exercises will reduce his chance of having another stroke by up to 40%. If we want to live long lives then it is very important to control our emotions, take care of our diet and keep fit through regular exercise which includes yoga training. 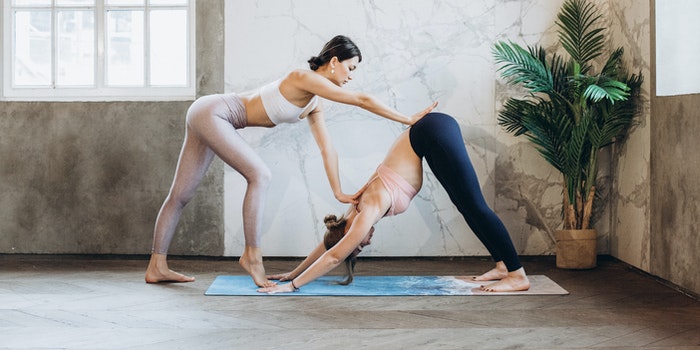 Facts about yoga and stress relief:

Stress relief is one of the best facts about yoga.

“Practicing yoga regularly can help you reduce stress, increase flexibility and mobility, improve posture, sleep better at night and even have fewer colds. Yoga also has a positive effect on many other important health issues—from helping with weight loss to lowering high blood pressure.”

So said NIH Director Francis Collins during his recent visit to the National Institutes of Health’s (NIH) Center for Complementary and Alternative Medicine (NCCAM). Dr. Collins was talking about the mind-body practice known as “yoga,” which is an ancient Hindu philosophy that encompasses quiet meditation, breathing exercises, and physical postures called “asanas.” People who practiced Hatha yoga for three months had lower blood pressure than before they started.

(Journal of Human Hypertension, 2007.) They also perceived their quality of life as being better after yoga training than before and had an increased proportion of slow-wave sleep.