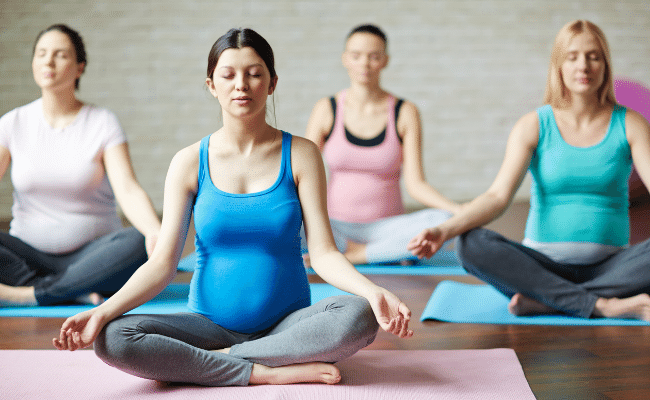 So many women are trying yoga for PCOS. Why? Yoga is a great way to help with the symptoms of PCOS. It can also be used as an alternative therapy to better manage this condition. Yoga for PCOS helps those who have difficulty losing weight, and helps them get rid of their excess fat around the stomach area through yoga poses like the downward-facing dog pose. Yoga for PCOS is also beneficial because it improves your mood and gives you more energy!

It’s no secret that yoga can be an amazing therapy for the mind, body, and spirit. But is there any scientific evidence to support the idea that yoga for PCOS can actually cure (or at least help) specific conditions? What is PCOS (Polycystic ovary syndrome)? First things first — let’s cover what PCOS really means. According to the Mayo Clinic website, it’s a common medical condition in women who have trouble getting or staying pregnant because of problems with ovulation.

That doesn’t mean they can’t get pregnant; it just means they may have difficulty conceiving. And if you think you’ve never heard of PCOS before now, you’re probably wrong: The condition affects about 10 percent of women or roughly 5 million women in the US alone.

As is often the case, there’s no easy A-B-C answer to this question. Studies have proven that exercise — and especially aerobic exercise — can lead to weight loss in overweight women with PCOS, but whether it has any long-term effects on the condition itself remains unclear. For example, one small study followed 35 overweight teens (ages 15 to 18) with PCOS for a year and found that those who routinely exercised reduced their fasting insulin levels and improved their insulin sensitivity by 24 percent over the 12-month period.

Another study involved 29 non-overweight adults diagnosed with PCOS who were assigned to either an aerobic training program or a control group; researchers found significant improvement in insulin sensitivity in the participants who exercised.

According to Johns Hopkins Medicine, a variety of things that may include your genes, age or weight can cause it. For example, if you have a family history with polycystic ovarian syndrome — and chances are if you have it yourself, you do — there’s a good chance that your children will too.

In addition, overweight (or obese) women are thought to be more likely to develop PCOS than their thinner sisters. Other risk factors include: being underweight; having diabetes or hypothyroidism; going through menopause before age 40; smoking; excessive use of alcohol or prescription drugs; and eating disorders such as anorexia nervosa or bulimia.

Is yoga good for PCOS?

PCOS is the acronym for the polycystic ovarian syndrome. It’s a condition that affects many women of reproductive age, and one of its biggest symptoms is difficulty in losing weight. This has led many to search high and low for an effective way to decrease their weight while also improving overall health. One of the latest trends in health is yoga for PCOS.

As more and more women are led to believe that it’s as good as any other way of staying fit and healthy, many have jumped on board. While improved fitness levels can be expected from any kind of physical activity, there are better alternatives than yoga for PCOS if you’re looking to get serious results.

How effective is yoga for PCOS?

Universally, yoga is considered good for PCOS due to its stress-relieving benefits. Stress increases the levels of androgens (male hormones) in the body, which aggravate the symptoms of PCOS.

Yoga for PCOS is a relaxing activity that may even help with sleep issues common in women with PCOS. As it turns out, there have been some scientific studies on this very subject. In 2017, researchers studied 20 women with PCOS who practiced yoga versus 15 who did not do yoga at all during a 12-week period as part of an exercise program.

(1) The participants were instructed to do yoga for PCOS daily for 30 minutes either alone or under supervision using YouTube videos (also available online). They were also asked to do another form of physical activity, such as walking, for 45 minutes five days per week. They were not allowed to change their diet. During the 12-week period, 60 women with PCOS took part in a supervised yoga class for 3 months.

(2) The group that did not participate in yoga was asked to continue with their regular activities. At the beginning and end of the study period, participants had blood work done including tests for testosterone and insulin resistance.

The results showed that the women who practiced yoga for three months had significantly decreased levels of testosterone than those who didn’t practice yoga at all over just 3 months. This suggests that practicing yoga can actually help lower elevated androgen levels, which is one main cause of PCOS. 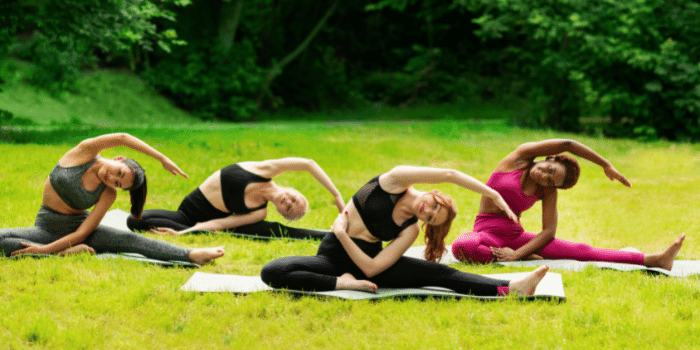 Is hot yoga good for PCOS?

For people with polycystic ovary syndrome (PCOS), hot yoga for PCOS can be very beneficial, helping to regulate blood sugar, blood pressure, and body weight. It has also been found in studies that men who practice hot yoga for PCOS regularly have a better sperm quality than those who do not.

There are several reasons why this is so. Hot yoga helps increase metabolic rate by influencing the thyroid gland. Increased metabolism results in increased production of heat energy which burns extra calories stored as fat in the body. Regular practice of this exercise also increases endurance levels and helps burn fat even after you stop exercising.

The boosted endurance levels allow your body to constantly work at an optimum pace for longer periods, reducing fatigue during exercise sessions and enabling long cardio sessions without feeling tired. Another important benefit of this form of exercise is the stimulation and relief from stress levels in your body. Stress has a significant effect on PCOS causing an increase in testosterone hormone secretion, which can trigger irregular periods among women with PCOS. Increased estrogen levels further cause acne, hair growth, and female-pattern baldness in men, all side effects of the condition.

Is hatha yoga good for PCOS?

Yes! Hatha Yoga can be very good for PCOS sufferers. From an anecdotal perspective, I know that it has been one of the most powerful tools for my own health.

Every time I do practice my symptoms gets better, so much so that they seem to disappear altogether. My periods have become more regular too. It is likely that other women with PCOS may experience similar results by engaging in hatha yoga poses daily or at least several times per week. In fact, professional studies suggest this as well.

Yoga for PCOS was designed as a mind-body practice to improve health and well-being. In yoga, the body is used as a vehicle for promoting healing through breathing techniques and movement sequences. Breathing exercises are meant to restore balance by quieting the mind, relaxing tense muscles, and getting oxygen-rich blood pumping throughout the body.

This relaxation of both the mind and body helps increase circulation while relieving stress that can lead to genetic hair loss issues in women who suffer from PCOS. Consciously doing these sequences promotes healthy blood flow within one’s scalp which encourages new hair growth from follicles that have been dormant due to hormone imbalance or genetics. Some women may even find their shedding lessens after practicing yoga regularly.

As a PCOS sufferer, I’ve noticed my hair shedding has decreased since starting Hallelujah Yoga. It certainly has helped to restore balance and relieve stress by quieting the mind during practice, allowing me to focus on each movement sequence toward improving my strength as an overall yogi. Not only do I feel more grounded after yoga, but it provides another tool in my arsenal of ways to manage the symptoms of my PCOS with meditation and positive lifestyle choices (more than likely including yoga).

In fact, different sets of asanas have been designed specifically for this condition by experts working on the subject for many years now. The best thing about these poses is they don’t require a prolonged stay in classes but can be practiced at home as well anytime during the day depending on one’s convenience

However, it will be a good idea to check for any pre-existing health conditions with your doctor before starting yoga practice as some poses might prove risky, especially those that involve breath retention (khumbhakas), so you can modify the same or better still avoid them altogether.

Also, there are certain postures recommended for PCOS treatment which should be done only under the supervision of an experienced teacher since they require complete understanding and correct alignment of body parts.

Restorative yoga might be a promising complementary approach for women with PCOS, but there is little information about its effect. A recent pilot study aimed to assess the effects of an 11-week course of restorative yoga for women with PCOS. The results offer encouraging evidence that this form of yoga could have multiple beneficial effects on key features of the condition including body weight, insulin resistance, and hirsutism. 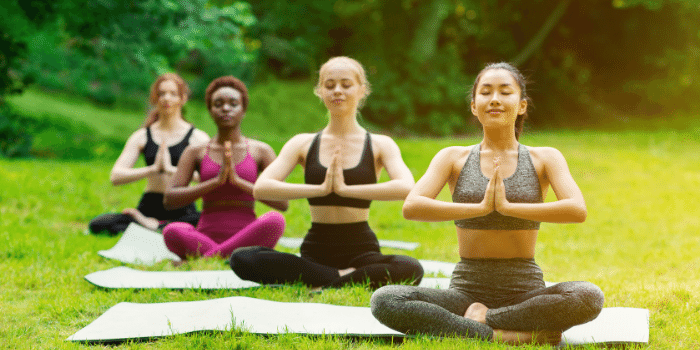 fertility yoga is the best part of PCOS treatment. Many women are affected by this problem and they are forced to leave their family planning for other better times. So, if you have been diagnosed with this disease then it will be helpful for you to read fertility yoga for PCOS because there is nothing as effective a method that can ease a woman’s life as improving the ability to conceive.

If you follow fertility yoga regularly, you will be able to naturally overcome your problems of infertility without experiencing any negative effects on your body or the process of pregnancy. As we said earlier that yoga for PCOS helps in getting rid of several disorders but when it comes to regular practice only a few individuals do it daily due to hectic routines.

Here are some tips which will guide you on how to practice yoga daily and how to overcome infertility problems:

You should start by performing exercises to improve your body posture. Yoga for PCOS helps in improving the elasticity of tissues and organs, especially the reproductive organs as it is an important part of fertility. There are several different postures for fertility yoga and you can enjoy these fitness movements according to your physical condition but for beginners, a very simple exercise will be most useful which is known as Ardha Matsyendrasana position or half Lord of the Fishes pose.