Is aerial yoga good? Aerial yoga is a new way to get your workout in, or just try something different. Aerial yoga poses are performed on hammocks that hang from the ceiling and support the bodyweight of the practitioner. Aerial yoga helps you gain strength and flexibility while simultaneously calming your mind with its slow movements. Aerial Yoga also provides an exhilarating cardiovascular workout as well!

Is aerial yoga a good workout?

Yes! Don’t let the inversions confuse you. Aerial yoga is a great workout for your entire body, and it does just as much good for your core (your body’s center of gravity) as any floor class. It challenges every single muscle in your body and helps improve posture by strengthening what is called “internal rotators,” which are responsible for everything from walking to sitting up straight.

It works on endurance, too; because you have to balance all of that time hanging from an aerial hammock or Lyra, you really do get a full-body workout. In fact, aerial is one of the best workouts out there if you’re interested in sculpting a leaner physique sans gym membership. You’ll see those results right away if you take aerial classes at least three or four times a week.

how is it different from other yoga?

Aerial yoga, like all yoga, isn’t just about making your body stronger and more flexible—it’s also about learning how to control your mind. Aerial yoga teaches you to be present in space, which really improves self-confidence as well as acrobatic skills. There are also styles that incorporate traditional handstands, arm balances, and backbends (if you’re familiar with any of those terms) while flying through the air on an apparatus called a silk hammock aka Lyra.

You’ll even learn how to safely fall without hurting yourself or damaging anything around you! Another difference between aerial yoga and your conventional yoga class: Aerial classes tend to be a lot more upbeat. Most teachers play upbeat music, and I’ve heard aerial students describe their classes as “dance-like” or even “rave-esque.” A great way to relax after a long day at the office!

If I had to describe aerial yoga in one word, it would be FUN. Fun and effective, that’s what I love about this style of exercise. It allows you to work out all the muscles of your core while focusing on strength training at the same time.

Is aerial yoga good for flexibility? yes, Aerial yoga is also great for flexibility training! The first class we took was a basic beginner-level class, and everything felt so natural! The moves are different from traditional mat-based yoga. For example, when doing planks and crunches, you will use the fabric (i.e., hammock) as an assistant which gives added resistance like ab straps provide only better because it’s much more fun ;). You can even do squats or lunges within the fabric to work your legs.

In addition, there are so many other things you can do while suspended on the hammock including flying like a bird (which uses your arms and core) or even using it as an added challenge to hold yourself in different positions for more time! I particularly enjoy focusing on my abdominal muscles and inner thighs during class. Plus, you can mix up the moves to always keep it fun. And yes.

it’s hard at times but that just makes it better—after all, muscle confusion is key when working out! Even though I’m not a climber myself, I really enjoyed trying out some of the basic Acro moves while suspended from the fabric – they feel extra challenging but also peaceful at the same time. I can totally see how the movements of aerial yoga may come from a climbing background since they both require strength & endurance in uniquely different ways. 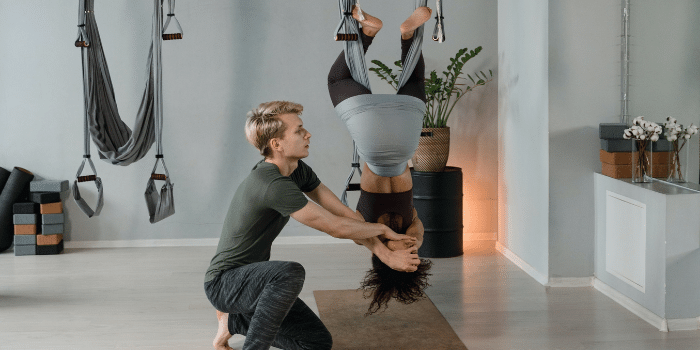 Is aerial yoga good for scoliosis?

Many people have questions is aerial yoga good for scoliosis? The answer to this simple question is yes. aerial yoga has a lot of benefits for all bodies – and that includes people with scoliosis. aerial yoga can help your body maintain strength while reducing pain from muscles tightening up due to exaggerated curves in your back.

it can also strengthen the muscles around your spine that need extra support, as well as help you improve posture and balance. some poses will even give you a full-body stretch through lengthening muscle tissue which can ease tension and discomfort in the joints (like shoulders).

These are only a few examples of how aerial yoga classes could be beneficial for anyone with scoliosis, but just like any other form of exercise or yoga, you should always consult a doctor before starting any new exercise regimen. For me specifically – I don’t have scoliosis, but the muscles in my back are definitely less than optimal due to years of being hunched over at a computer and other habits from growing up with a congenital spine deformity.

That’s why it’s so important for me to find ways to strengthen them – and aerial yoga is one way I do this! if you have scoliosis, there’s no reason not to try aerial yoga either (as long as you’re cleared by your doctor)! the more we encourage people who aren’t using their bodies optimally to get moving, the happier everyone will be!

Of course, it’s worth mentioning that you should always get clearance from your doctor before starting any new form of exercise. This is especially important for anyone who may have an underlying condition like scoliosis, so it doesn’t get exacerbated by the exercises. If you happen to be a person with scoliosis or a parent of someone with scoliosis and want to know more about what aerial yoga is all about, I encourage you to read the rest of this post.

Is aerial yoga good for back pain?

the answer to the question is aerial yoga good for back pain? is simple. Aerial yoga is a slow-paced, gentle practice that puts very little strain on your back. in fact, it can be practiced for therapeutic reasons to improve flexibility and help relieve low back pain. The key to getting the most out of aerial yoga is to listen to your body. go slowly and never push yourself too far beyond what feels comfortable.

Aerial yoga builds strength over time as you learn how to properly support your own weight with your hands and feet. Not putting excess pressure on your core muscles or spine. additional support will always be available from the instructor or an assistant when needed, but it’s best to practice at a level where you are using minimal assistance so that you can build internal awareness of proper alignment and form long before it’s needed.

Aerial yoga is a great way to start feeling the benefits of inversion therapy in a low-risk, low-impact way. once your instructor or assistant feels you are ready, you can be gently lifted into different aerial poses to experience full weightlessness while getting an overall body workout and increasing flexibility, balance, and coordination. Check with your doctor before starting any new exercise routine because everyone has different physical limitations that may prevent them from attempting certain moves. regardless of where you fall on the spectrum, aerial yoga has something for everyone!

Is aerial yoga good or dangerous, Aerial yoga may be dangerous. Aerial yoga is one of the fastest-growing fitness trends in the country. And while it has many benefits — including training to increase stamina and flexibility — there are some significant dangers that could result from its pursuit.

1) The most obvious danger lies in falling during a pose. There have been several serious injuries and even deaths across the world as a result of falls, but people do not always fall due to their own negligence or carelessness. For example, if one person pulls out an anchor piece without knowing how much weight it can handle (which is usually about 200 pounds), then everyone on that piece may risk being pulled down with it. Likewise, if too many people climb onto one rope at once, they may pull down the ceiling and the equipment.

2) Another danger lies in conduct and behavior during classes. “The biggest risk to safety is actually other people,” says Jennilyn Rangel, a California-based aerial yoga instructor. “It’s very easy to get distracted or not know what you’re doing if you’ve been drinking alcohol.” Aerial yoga involves stretching in ways that may seem unnatural at first.

Thus, it requires concentration; otherwise, one could easily slip out of position and fall to their death. Climbing onto high places also poses a significant risk for distraction, as well as the inability to keep oneself steady while on the ropes or silks—especially for those who are intoxicated from drugs or alcohol prior to class.

The answer to the question is aerial yoga good for weight loss? is yes. But not in the way you might think. And if you’re looking for something that’s going to reduce fat from your body, it’s still going to be very difficult to achieve with aerial yoga. It can help you get more flexible and have better posture (both of which will help burn fat), but it’s not something that will necessarily change the ratio of how much lean muscle you have versus fat tissue on your body.

Even when you lose 20 pounds of fat, for example, there are areas on your body — like around your belly button — where the fat is actually being replaced by muscle even though the scale looks lighter. Right? So don’t go jumping onto an aerial hammock thinking it’ll thin out your thighs! If you want to burn fat and lose weight, increasing your lean muscle mass is your best bet. This isn’t just good for helping you look better naked.

it can help keep your metabolism going strong (even while you’re sleeping). By adding lean muscle tissue to your body, even if the scale reads the same weight, you’re essentially building in a little caloric furnace so that when it’s time to eat again, more of that food will be used as energy rather than stored as fat on your body.

It’s not an easy process (especially if you hate exercising), but with enough work — combined with the right eating habits — this is how people actually get those six-packs and flat bellies. Not everyone has that kind of time, but it may be worth looking into if you’re at least trying to get toned and keep the weight off. 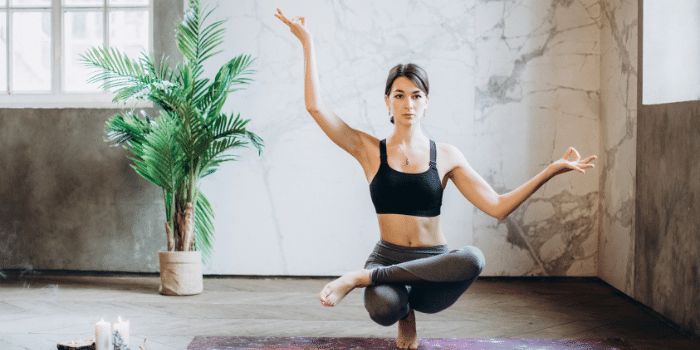 Is aerial yoga safe for pregnancy?

Many women have a question that is aerial yoga good for pregnancy? Aerial yoga is great for pregnant women. It helps manage back pain, eases stress, and improves moods all while being engaging enough to stave off a lot of common pregnancy discomforts. The aerial hammock allows you to gently support your back and joints in non-impact positions. Aerial yoga can provide the pregnant body with more comfort than a typical exercise class on the ground.

An aerial hammock relieves weight from having to rest directly through the spine by offering gentle support which gives muscles breaks from supporting the growing baby. You don’t have to do anything too strenuous or fast-paced because it’s pretty easy to move slowly when floating around in a big mesh hammock!